There are four kingdoms found in the Eukaryota Domain, they are Fungi, Plantae, Animalia and Protista. Plants and animals are familiar to most people, although there are specific criteria for each that may not be so familiar and a few very odd exceptions. Fungi were once included with plants, but are now known to be very different, and in some ways more similar to animals. Protista is a bit of a hodge podge as kingdoms go, it is unlikely to last much longer as one kingdom, and indeed many scientists have already rejected it because it doesn’t make much sense in evolutionary terms, however, the reordering is still in flux, so I will include Protista as one kingdom.

A clear to understand website about the Protista Kingdom and one from which I got the photo of Giardia lamblia below. http://www.uic.edu/classes/bios/bios104/mike/bacteria01.htm

A website that talks about a possible Seven Kingdom system http://www.fossilmuseum.net/Tree_of_Life/Domain_Eukaryota.htm 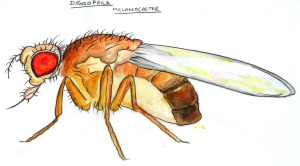 What makes an animal, an animal? Animals are heterotrophs, they cannot make their own food. They can move, are multicellular and reproduce sexually.

Evolutionary history: The earliest animal fossils that have been found are from sponges, dated 665mya, however, animals may have originated 1000mya. Most animals appeared around 542mya and relations of millipedes are the first animals proved to have made it on land 428mya.

Number of phyla and species: 35 phyla, this includes 13 phyla for different worm-like creatures. The most familiar phyla are:

In total it is believed there are between 3 and 30 million species of animal.

Habitats: Polar to desert, temperate to tropical, oceans to mountains.

Cellular and structural description: Animal cells do not have cell walls or chloroplasts and are often a round shape. Animals contain tissues and organs of a complex nature, for example the tympanal organ for hearing in insects and brain tissue in humans.

Abilities and behaviour: Most animals move at some point in their life-cycle, they breathe out carbon dioxide and breathe in oxygen. They eat food for energy – fungi, plants, bacteria, other animals. Most reproduce using sperm and an egg, although some animals are hermaphrodite or reproduce asexually.

Some exceptional animals: Coral are colonies of genetically identical animals that don’t move. Sponges also don’t move and lack true tissues or organs. Green sea slugs use chloroplasts from algae they eat to then photosynthesize like plants. One species of hornet, Vespa orientalis, may derive energy from the sun. (For some other unusual animals see the Odds and Ends of Nature tab)

What makes a plant, a plant? Plants are autotrophs, producers, they make food (carbohydrate), by photosynthesis. Plants can’t usually move and their reaction to their environment is slow. They are multicellular and have complex organs and tissues.

Evolutionary history: Although plants originated in the sea, unlike animals and fungi, they did not evolve much there. Green algae (a primitive prototype plant and member of the Protist Kingdom) lived in the sea, but in order to make the move to land, where they could access more sunlight for photosynthesis, they needed to adapt to different, drier conditions. The first plant to grow on land was the now extinct Cooksonia (433-393mya), it had a waxy cuticle to stop the leaves drying out and roots to anchor it to the ground and absorb water. From Cooksonia evolved mosses, liverworts and hornworts (475mya), plants with a very basic ability to transport water. Ferns, followed by conifers and finally all flowering plants, evolved later.

More on Divisions and plant evolutionary history in future blogs.

Habitats: Diverse, just about anywhere with air and sunlight.

Cellular and structural description: Plants cells have cell walls made of cellulose and chloroplasts. They have a very rudimentary circulatory system and the ability to sense their environment, but only simply – they can detect sunlight, but not see images, they can react to touch but it is mostly a slow process. They have organs and tissues, for example, the leaf is an organ and on its surface is photosynthetic tissue.

Abilities and behaviour: Plants are generally rooted in one place and do not move on their own, however they can grow in response to their environment. They give off oxygen and take in carbon dioxide through photosynthesis, a process which uses sunlight to make carbohydrate, which is then broken down by the plant for energy, however it is often consumed by fungi or animals instead. Plants reproduce sexually by fusing egg and sperm, but being unable to move they need different methods to transport the sperm to where the egg is, for example using wind or insects.

Some exceptional plants: Mimosa pudica can move, responding instantly to touch by collapsing its leaves against the stem, this is a defensive measure that hides the leaves from animals that might eat them. Ivy broom rape does not photosynthesize, but parasitizes ivy, growing from its roots in a similar manner to fungi. Some plants trap insects and digest them for nutrients, but not for energy in the way that animals do, these plants often move also, for example Venus Fly Trap. The Socratea exorrhiza is a tree described as being able to walk, but this is not walking in the way an animal would; it involves having above ground roots that move towards the sunlight by growing more roots on one side and allowing those on the shady side of the plant to die, so that in time the plant shifts both over- and underground.

What makes fungi, fungi? Fungi are heterotrophs, decomposers that cannot make food so they grow on living or dead organisms, breaking them down.

Evolutionary history: The first fungi were in the sea probably dating from 760-1060mya, fungi colonised the land long before animals or plants, probably 542-488mya.

Number of phyla and species: 6 phyla (although a seventh has been proposed). They are:

10,000 species of fungus have been described, but there are thought to be at least a million. Fungi are more varied in the tropics than in areas closer to the North or South pole. For example in Britain and Ireland fungi outnumber plants 6:1, in Southeast Asia the ratio is 33:1.

Habitats: Fungi need plants, animals or other fungi to grow on or with. Most live on land, but a few live in water. Plenty live inside other organisms. 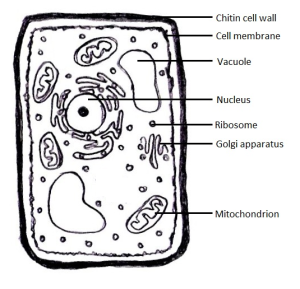 Cellular and structural description: Fungi have cell walls like plants, but made of chitin, the substance found in the hard exoskeletons of insects, rather than cellulose. The main part of a fungus is the mycelium, small threads that attach to other organisms to obtain food, these mycelium can grow for several km. Most fungi produce fruiting bodies these are what we think of as mushrooms, but are only a fraction of the actual fungus. Fungi have a simpler structure than plants or animals, but the fruiting body is an organ and it is made of tissue.

Abilities and behaviour: Fungi cannot photosynthesize and must consume food, they do this by attaching to other organisms (plants, animals or other fungi) by filaments and then take food from their host – sometimes this is a parasitic relationship, sometimes symbiotic (mutually beneficial, eg the fungi provides a means of extracting nutrients from the soil for its host plant) and sometimes saprophytic (consuming dead material, this is an essential part of the process whereby dead organisms break down, without these fungi the planet would be filled with dead bodies.)

Some exceptional fungi: Lichens are composite organisms, made up of fungi and algae working together. The alga can photosynthesize and so provides food for the fungus and the fungus protects the alga from desiccation in harsh environments. Lichens can grow in environments that neither algae or fungi could survive in alone. Along with bryophytes, lichens were probably some of the first organisms on land. Some lichens also contain Cyanobacteria (a bacteria).

Common examples: Kelp, amoebas (Protozoa), seaweed, algae, the cause of malaria and sleeping sickness (NB: cyanobacteria are sometimes referred to as blue-green algae, but they are in the 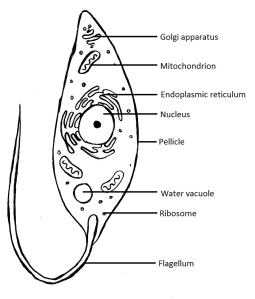 Bacteria Domain), slime molds, diatoms (type of  algae). Volvox is a genus of single celled protists that live in colonies (see Odds and Ends of Nature tab for more about these and slime molds).

Number of phyla and species: 200,000 species. Usually ten phyla, although these often change.

Habitats: Protists live mostly in wet places, the sea, a damp corner, or an animal intestine.

Cellular and Structural description: Most are unicellular and invisibleto the naked eye. They are more complex than bacteria and have their nuclei wrapped in a membrane, but simpler than other eukaryotes having no specialised tissues, they do, however, have organelles in their cells such as mitochondria and chloroplasts.

Abilities and behaviour: Some protists are autotrophs, some are heterotrophs, some photosynthesize and expire oxygen, others consume and breathe in oxygen. The protists that move do so by a number of means such as pseudopodia or flagella.  Most Protists reproduce asexually, a few reproduce sexually and some alternate between the two.

Note: I recently received an email from someone helpfully pointing out that cells have only one Golgi apparatus, rather than the several that I had drawn. I have since altered these diagrams, sorry for the misinformation and thank you to the informer.